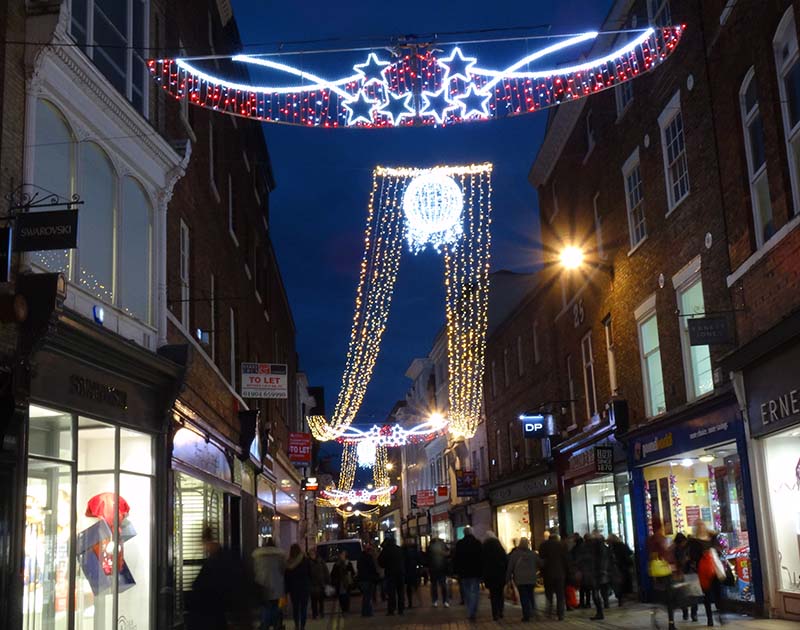 York’s Winter Lights, designed and created by Gala Lights, have been hailed a resounding success and have helped drive visits to the city during the off peak tourism season.  Visits to attractions and hotel occupancy levels were all up during November and December and the new lighting has proved popular with both visitors and residents alike.

The city’s magical Winter Lights experience, using over 160,000 LED lights, has seen York awash with lights in white and warm white, creating a beautiful and magical atmosphere in keeping with its architecture.  York Bar Walls are the most complete examples ofmedieval city walls still standing in England and the main gatehouses or ‘bars’, Micklegate, Bootham, Monkbar and Walmgate have been transformed into shining gateways for the second year in a row.

From November to December there was a 13.2% increase in rail journeys to the city (19 November – 23 December).  At the same time footfall into the city was up by 1.3% year on year, booking the national trend, and coach bookings were up by 8%.

In 2017 visits to attractions were 5% higher year on year and in December, visits were 15% higher than in December 2016, with those attractions with Christmas events and exhibitions benefitting the most from these extra visitors.  Meanwhile the very latest footfall figures released in January show a 3.4% year to date increase.

York Business Improvement District (BID) and Make It York, the city’s Destination Management Organisation, joined forces to roll out the city’s best ever winter and Christmas lights display and the winter lighting will continue to the end of February.

Sally Greenaway, Head of Visit York, a part of Make It York, said: “The winter months are a vital time of year for local businesses and the tourism industry and we’re delighted the winter lighting scheme has been so popular.  Now that the festive season is behind us it is crucial York continues to attract visits during the traditionally quieter months and the Winter Lights scheme has added a new dimension, drawing in shoppers and visitors to enjoy the city lit up by night.”

Andrew Lowson, Director, the York BID said: “The York BID in partnership with Make it York put a large investment into both Christmas and Winter Lights for 2017/18.  The Winter Lights will continue right up to the end of February to brighten up the city during the dark winter months.  Feedback has been very positive and the Bar lighting means that whichever gateway you pass through into York, you can see these beautiful structures in all their glory.”

Add sparkle and animation to your festive display
July 5, 2021

Colour and animation for magical lights this Christmas
March 15, 2021