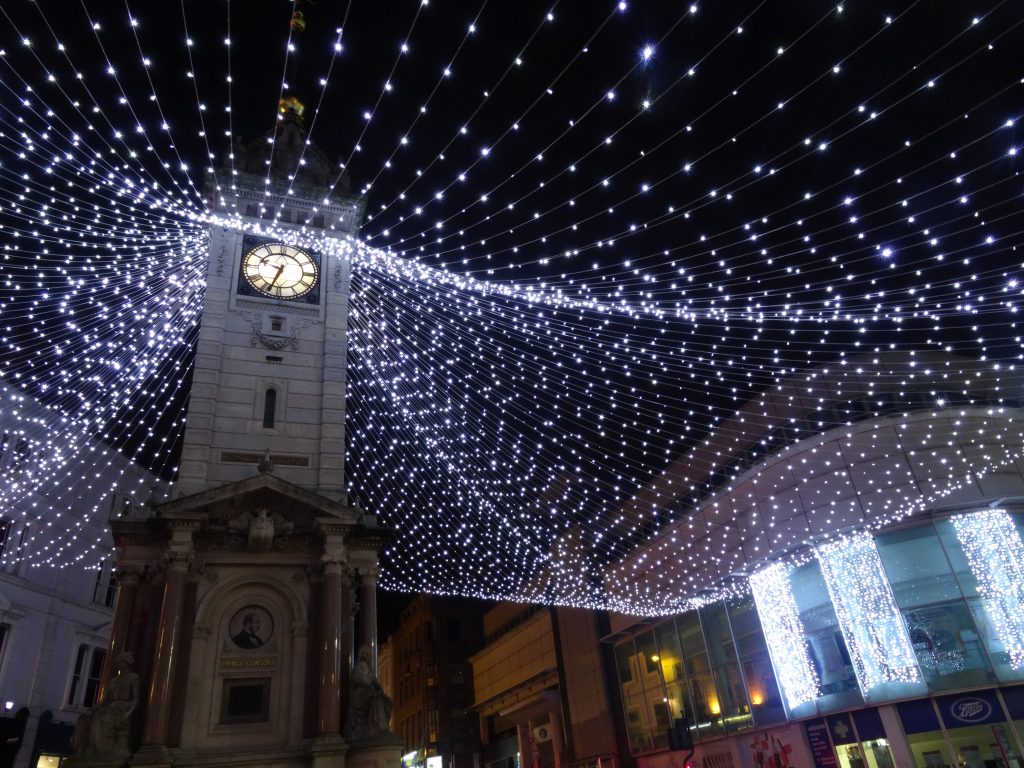 Christmas lights, including decorations displayed overhead, on lamp posts, or highlighting significant monuments, statues and buildings, are a fantastic way of adding an extra sparkle to villages, towns and cities during the festive season.

Everybody enjoys the magical sparkle of traditional Christmas lighting displays, but now some of the more contemporary lighting schemes include elements which are good for social sharing – whether that be a 3D centrepiece, design competition, or significant switch-on.

Every year thousands of families are drawn to their local Christmas light switch-on, to enjoy the event and soak up the atmosphere, and there are now increasing ways in which local community members can get involved, both at the switch-on event and in sharing their experience via social media.

Research also shows that a good festive lighting display results in an uplift in retail sales, which is great for local businesses. Investing in a good Christmas lighting display is a win-win for everyone.

The city of Brighton received a fresh new look for its Christmas lights in 2016, bringing the seasonal display more in-keeping with the youthful, vibrant and connected nature of its residents.

Taking inspiration from the city’s unique history and contemporary urban vibe, the team at Gala Lights designed a scheme which had personality and connectivity at its heart. The design included emojis and used #s throughout to encourage social sharing amongst residents, visitors and the local community.

“Gala Lights helped us achieve a truly unique and exciting lighting display for the 2016/17 festive season.

The positive feedback from the public on social media was unprecedented and the back-up support was second to none.” Gavin Stewart, Chief Executive, Brighton BID.

Some of Brighton’s most well received Christmas lights include a series of Christmassy words displayed across major streets with hashtags and emoji features, and bespoke mod-inspired decorations hung amid icicle lights in surrounding areas. There is also a stunning sparking ceiling of light cascading from the Brighton clock tower, and strings of twinkling icicle lights and curtains of lights hung on significant buildings around the city. The lights create a magical atmosphere and are truly a must-see for residents and visitors alike.

This Christmas, to keep the community engaged and the scheme fresh, Brighton BID is running a competition via social media for a new word to add to the display. Gala Lights will create a new decoration featuring the winning word, switched-on with the wider display on Thursday 16th November.

In addition to Brighton, Gala Lights also works with:

Canterbury BID – this is a beautiful and delicate scheme using classic colours of white and warm white, and taking into account the important historical and architectural surroundings.

Carlisle City Council – this scheme includes across street decorations, lamp column motifs and ceilings of light, as well as bespoke ‘double cone’ trees and 3D nativity motifs. There is always a good switch-on event which creates a good atmosphere and draws thousands to the city centre.

Dumfries & Galloway Council – this new scheme includes traditional red and green decorations, alongside accents of blue. First seen across Dumfries, Thornhill, Kirkconnell, and Sanquhar in 2016, local residents braved the rain for the switch-on.

Plymouth BID – a stunning celling of light, as part of the South West’s most impressive festive lighting scheme, draws people to the city centre for this crucial trading period.

York – Gala Lights has just been awarded the contract for York City Centre in Christmas 2017. It’s going to be a beautiful scheme, sensitive to the ancient architecture.

Harrogate’s Christmas lights will shine brighter than ever this year with new scheme from Gala Lights
September 24, 2020